This banner can be used to inform vistors of something important.
Learn more

Get a free template for your Google Search Console data, copy it and use it in 2 minutes ! 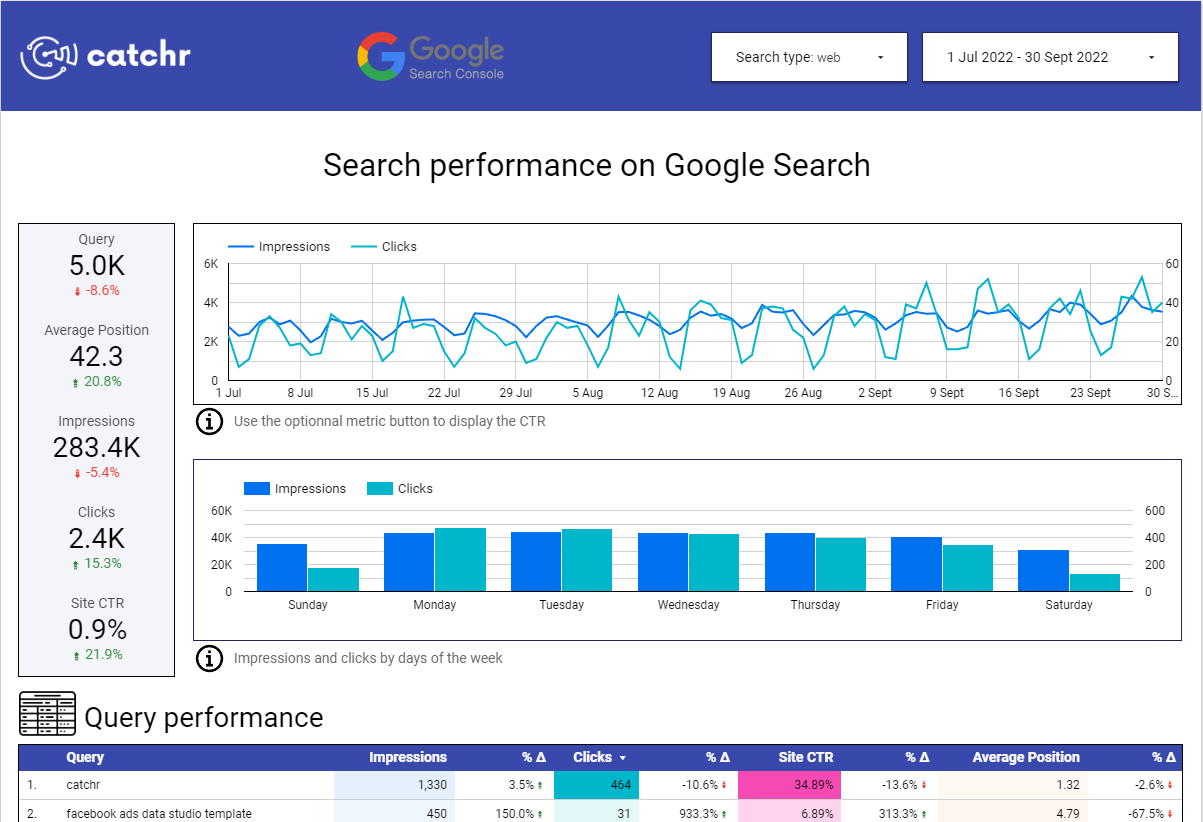 What I can do with this Google Data Studio Template ?

Get more insight about how users find you on Google Search, explore query and their performance ! What are the best keywords your website appear, what are the worst. Did you appear in Image, Video or News search ? You'll get to know everything. 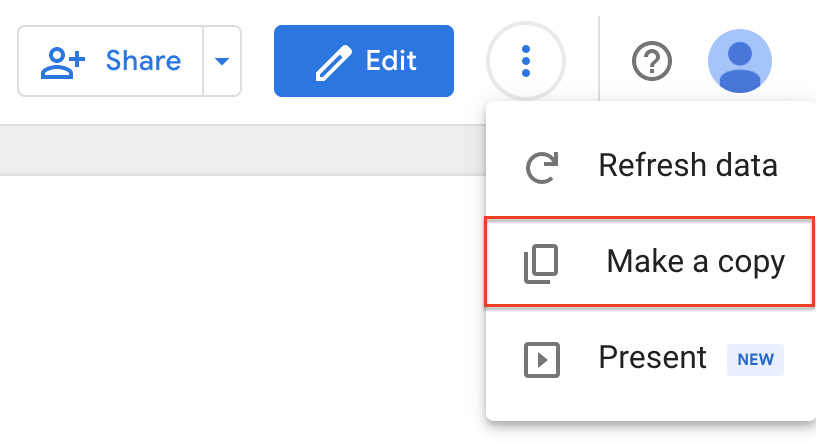 On the top right of the template, you will find a menu with "Make a Copy".

Click on it to start copying the template and go to the next step.

Link the data sources according to the sources

Check the original data sources and link your own in front of the original.
Then copy the report.

You can create your own data sources thanks to our connectors. Check the list here and start creating yours. 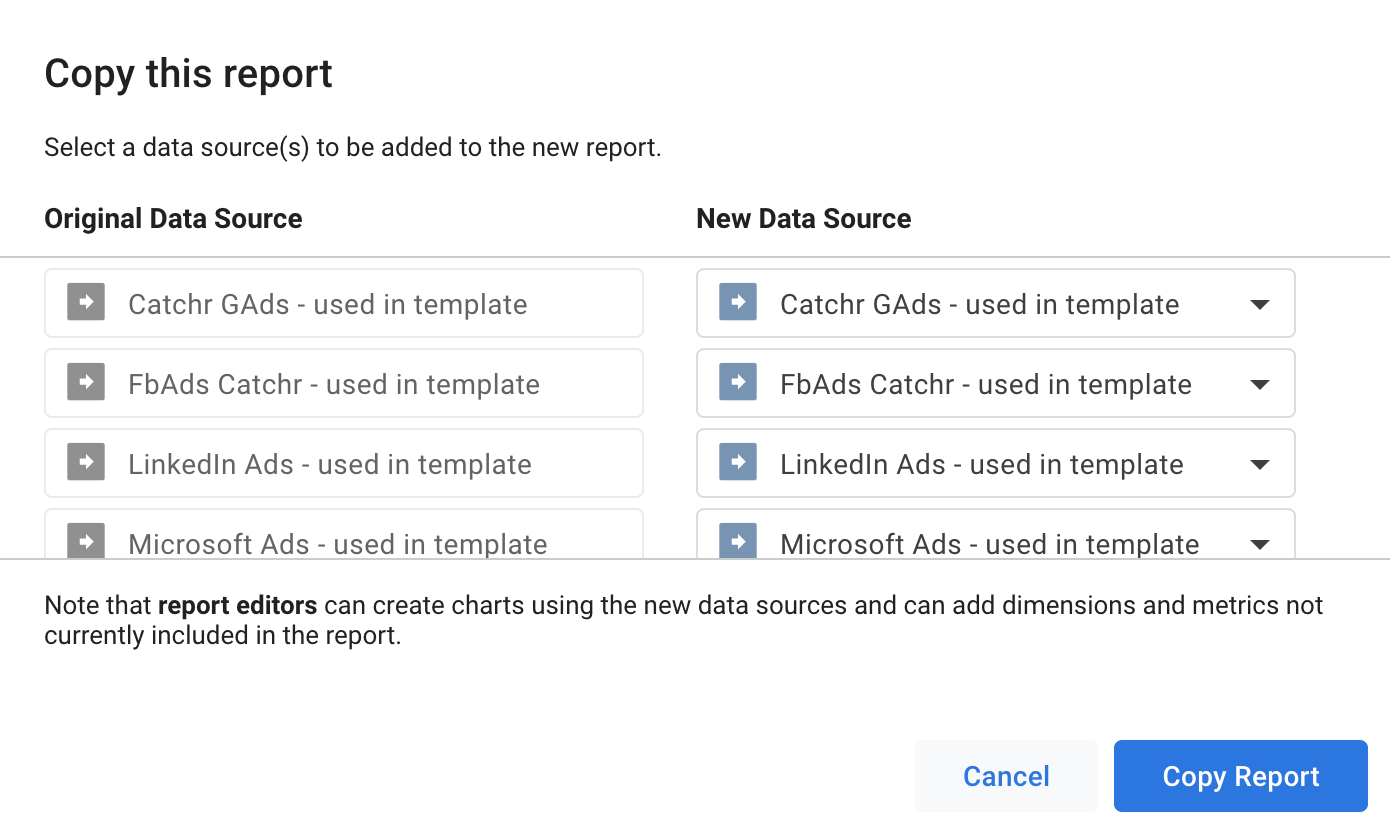 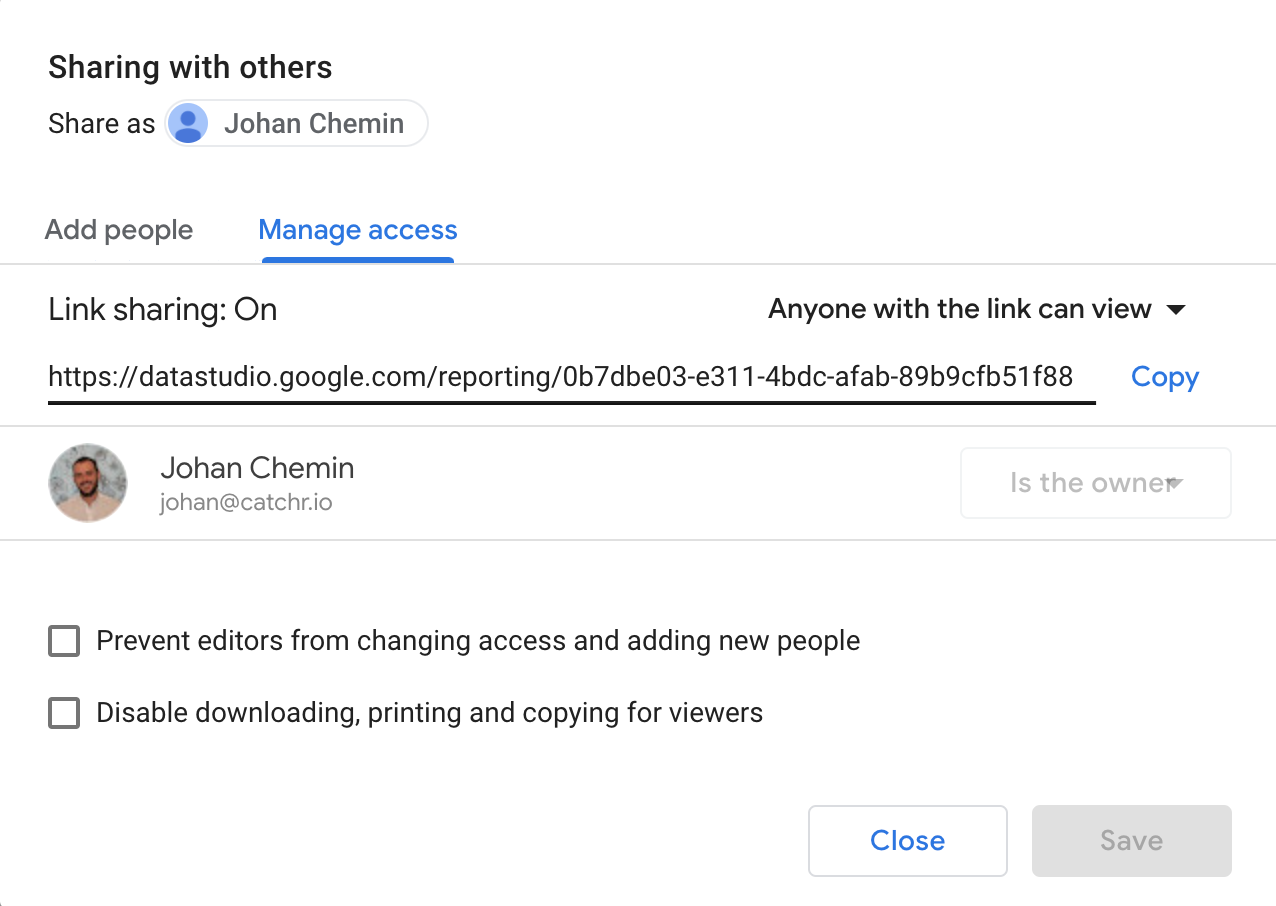 You can now start reporting.

You are now the owner of this template, you can modify it to fit your needs or start using it right now.

Why use Google Data Studio ?

Build Dashboard that work for you.

Google Data Studio  is a free tool that turns your data into informative, easy-to-read, easy-to-share, and fully customizable dashboards and reports. Using its drag-and-drop functionality, you can build any dashboard you want.

Thanks to it's highly configurable components, you can filter all your data as you want.

Connect to your data.

With Google Data Studio and the Catchr connector, you can easily integrate all your marketing data source and easily create report from a wide variety of sources, without programing.

In just a few moments, you can connect to data sets such as Facebook Ads, Google Ads, Instagram, etc.

It's easy to share your insights with individuals, teams, or the world. Invite others to view or edit your reports, or send them links in scheduled emails. To tell your data stories as broadly as possible, you can embed your reports in other pages, such as Google Sites, blog posts, marketing articles, and annual reports.

When you share a Data Studio file with another editor, you can work it together in real time as a team.

This is where all the answers to your questions are.

How can I connect my accounts to the template ?

First, create your data sources on Google Data Studio, then make a copy of the template and give it your newly created data sources.
Feel free to contact us so we can help you setting it up.

Can I edit it to fit my needs ?
Sure ! You just need to copy the template to be the owner. You can then change everything you needs.
Do not hesitate to ask for our help. We are used to find metrics and dimensions for our users.

You can share a template with who ever you want with the URL. It is accessible for one who have the URL.
Once you copy a template and become the owner, you can choose who can see and who can edit.
The is no limitation in the sharing of your reports.

Can I use a template with my free trial ?

Of course you can ! All of our services are fully accessible with the free trial.
Ask for help, we can create your reports, give you a tour of the alerting system or just chat about business oportunities.

How many reports can I have for my accounts ?

You can create as much as reports as you need. There is no restriction on the number of reports or the number or sharing.

What happens if I use all my credits?

This is where all the answers to your questions are.

View all our others Google data Studio templates that you can use now ! 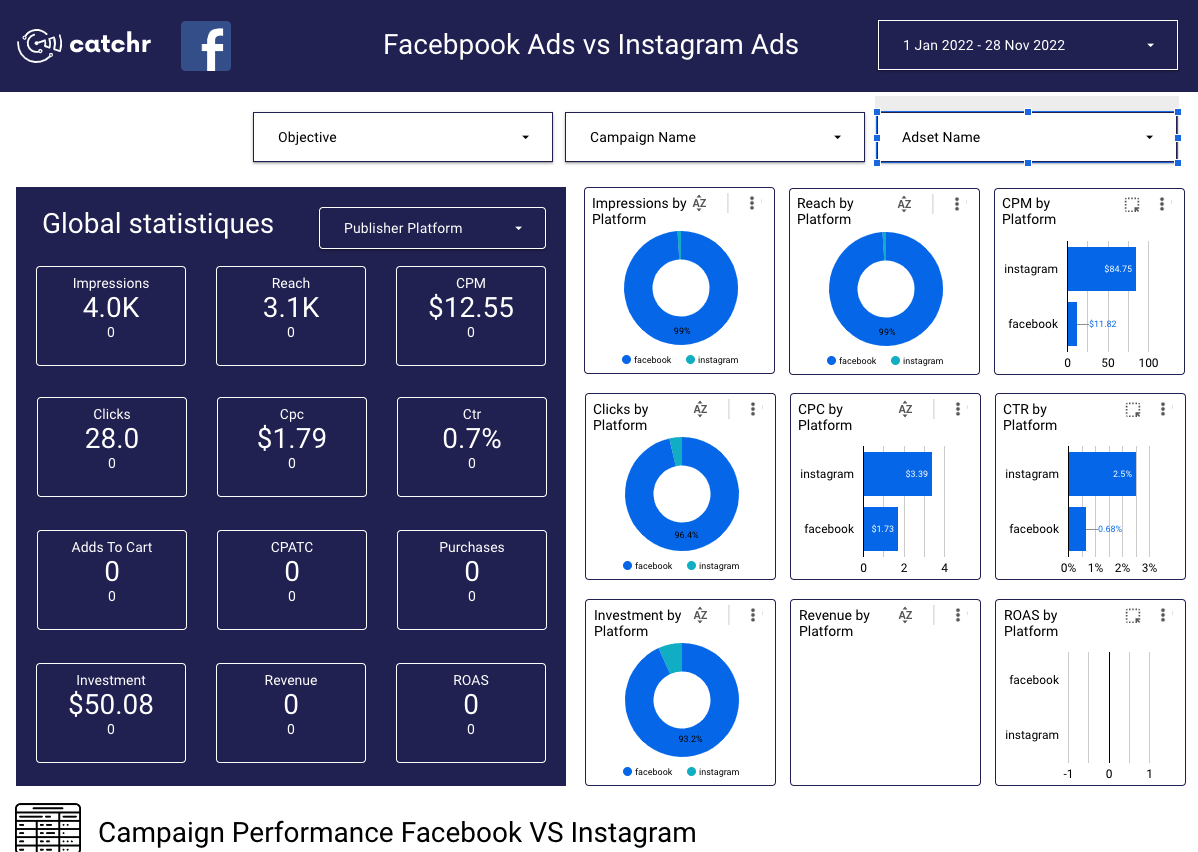 Compare your Ads performance on the Meta platform thanks to this go-to template for Looker Studio ! 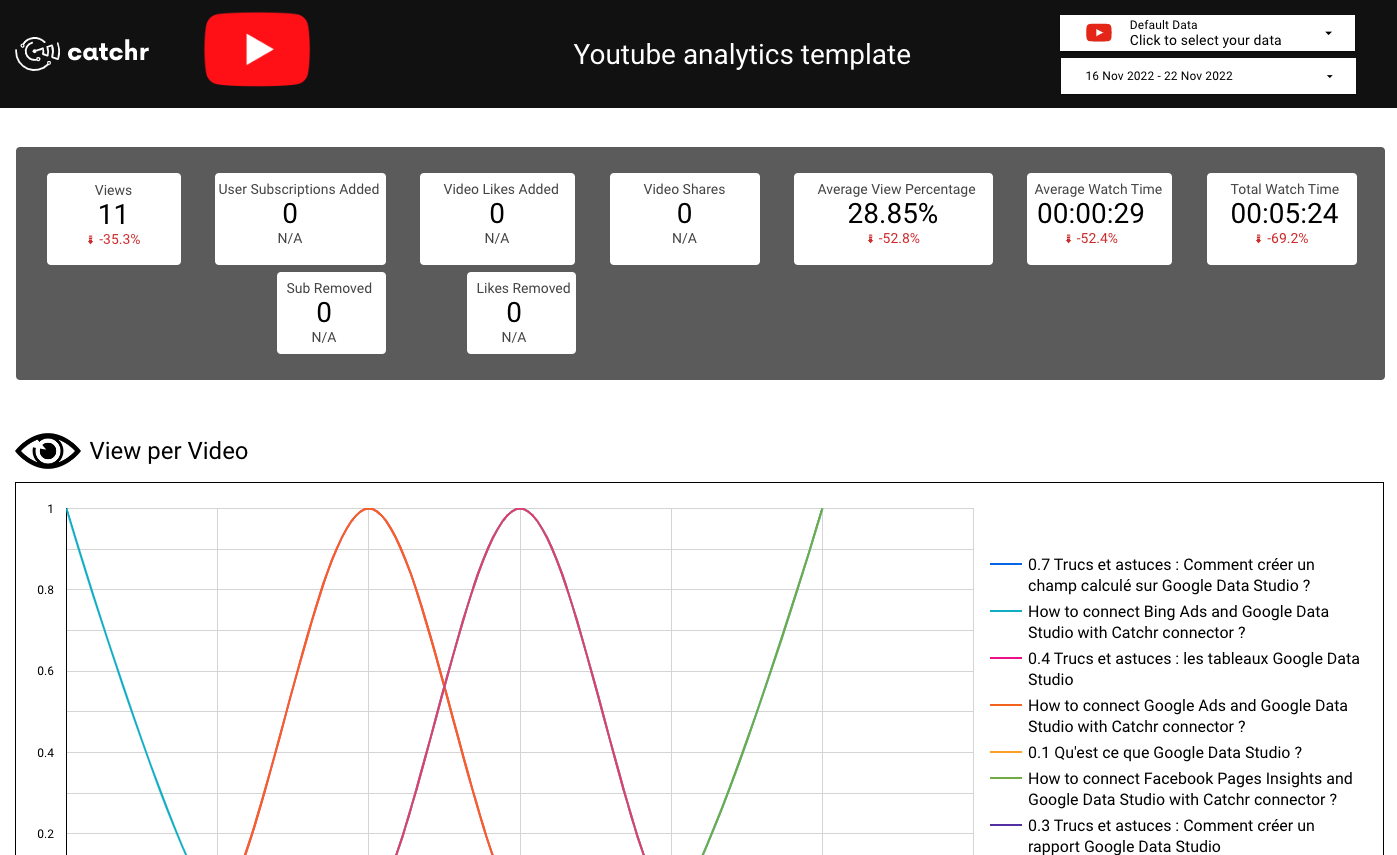 Get a quick insight on your Youtube Channel ! How many views, likes, shares do you have by video ? How many new subscriber this week ? 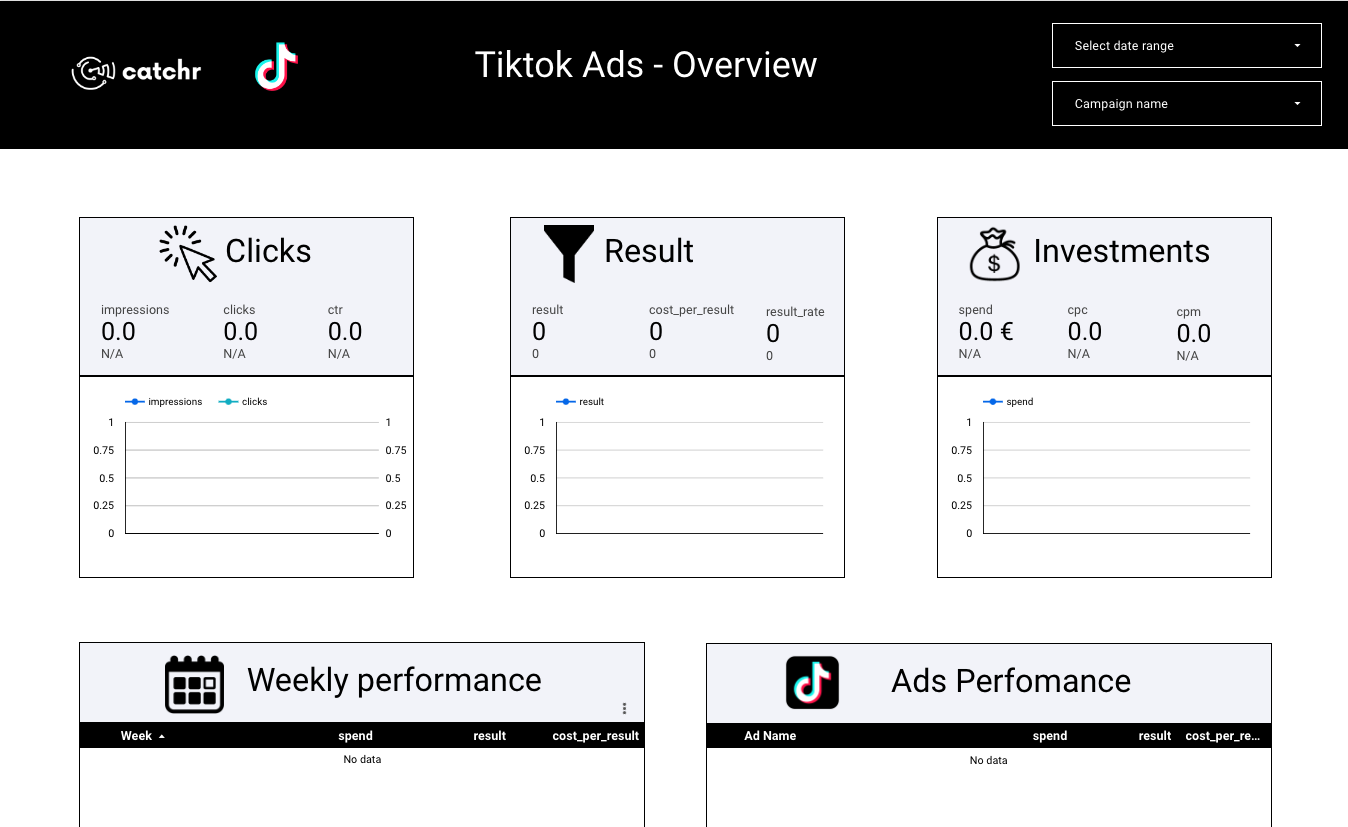 Quick insight on your Tiktok Ads account ! Get information about your visibility, your investment and your result easily !

Get a free template for your Google Search Console data, copy it and use it in 2 minutes !

Contact UsPrivacy PolicyTerms and conditionsCookie PolicyPricing
Thank you! Your submission has been received!
Oops! Something went wrong while submitting the form.